Peter Connan wrote: ↑
20 Jan 2020 12:27
I guess more is always more. But that's a lot of extra weight to lug, and a fee days into the trip, you will basically be in the same boat. Once you have used that extra 50Ah, then you still need to put in what you use.

If you have the space and the payload available, by all means use it. But I suspect you would be better served by increasing your solar input. They still give some power even when it's overcast.

That is assuming your alternator has the capacity to load up all three batteries. Else I would prefer to stick with two batteries.
Skilpad, Shortie & Toro.
Top

Anyway, I run 2 fridge/freezers lights etc, and so far 4 hours drive has always been enough to put back what I have used (however this is with a C-tek).

Last camp trip was with Peter at Bosbologo, long weekend and my 100W solar panel was enough to keep me going for the weekend, I did 2 game view trips for no more than 2-3 hours.

Very important for me is to ensure that batteries are 220V charged before I set out on any trip, I also run my 2 fridges on 220V in the car till 5 minutes before I leave, and I put freezer on minus 20 on the 220V and then turn down to -5 when I depart.

Thus the batteries almost use no power on the way there and then one manages it when camping.

Yes I have a feeling about the same regarding weight and the difference between charge time and extra amps. So this would not be a third battery, but as a replacement if my second dies one day.

And look at it another way - rated output of my alternator is 110amps. Rated refers to amount of amps the alternator can produce according to industry standard which I think is 6000rpm. I hardly ever go over 3000rpm so already that is lower than probably 90amps on average. I can't find specs on the Hitachi alternators but I don't think it will be more than 50amps at idle output. So in short, my driving style, I will be between 50 - 90amp output. Given enough of a long drive, even low amps will charge up batteries providing you don't have excessive demands from accessories etc.

I agree with Peter on adding additional solar, but that is then extra cost, but definitely something I will look at soon. Solar panel pricing is actually ridiculously cheap compared to 5 years ago.

Dirk, I like that idea. previously I would only plug my fridge in 220v a day before leaving, but never thought of getting both batteries up to full beforehand.

Anyway, this was just an exercise in what if's... And I don't like the thought of carrying a 45kg battery to the car.
Rhett
https://www.youtube.com/channel/UC9e98c ... XUyixKJavQ

I run two 120 Ah secondary batteries (https://4x4direct.co.za/deep-cycle-batt ... gKrVfD_BwE)** in my 3.0Di, the diesel Patrol has space in the engine bay for one and the other one sits quite high up in the left rear in the rack system (uses up the wasted space above the solid "pocket type" storage on the left fender side of the load bay against the window). Both batteries are AGM Hybrid GEL batteries in plastic battery boxes and I just used to run it through a NL solenoid charging system and never had issues, even two weeks in the Kgalagadi and Mebuasehube in January last year with temperatures in the 40s and not too much driving. The box in the engine bay is insulated for the heat, 5mm asbestos sheet in bottom and 13mm thick polystyrene on the engine side, of the upright sides.

Some days when we moved camp, we would do maybe 3 hours and some days an hour, some days nothing. One day near the end we did 8 hrs moving from Mebuasehube to Khutse.

I know that after fitting the Madman and finally having a way to measure the standard factory fitted alternator output voltage under load, it was sitting at 14.1v for about 5 or 10 mins and after that would settle at around 13.8 and 13.9v. I also had a 30 amp DC to DC charger lying around and reading its operating instructions, installed it after talking to Tinus about a year ago, and set up its dip switches for a GEL battery, which means its output should be at 14.7 or 14.8v (during ABSORPTION charge cycle) to effectively charge the two batteries. This is not happening. It "absorption charges" at only 14.4v and settles at 14.2v.

When I turn the car off, the battery sits at 12.6v. After running the NL 90lt overnight now while camping in the December heat, it was at 14.4 the next morning with the freezer set at -6C, at times it went as low as 12.2v, but never less. I charged it during the day with panels totalling about 180w, again only getting the batteries to 12.6v, maybe some nice sunny days to 12.8v.

I am most definitely not spending the money they want for the Ctech Dual, the 2505 is it? I permanently use a Ctech 5 amp charger when parked at home, also set to "GEL" and "RECON", but the max it settles on at stage 7 or 8 is 12.6v. The fridge freezer stays running in the back of the Patrol all the time. Sometimes I turn of the 220v for it to run off the charging batteries for a few days.

PS
** Those two batteries are called 120ah batteries, but someone in the industry told me they are actually only 105ah. They are the same size as other 105ah batteries...
Top

Well on all 12v batteries - fully charged is 12.6v (let the battery stand for a few hours or overnight disconnected to normalize).

BUT Gel can be discharged lower than 50% and still be able to be charged up to 100%. AGM batteries can also be discharged deeper than conventional L/A batteries with no damage, and have a lower internal resistance so can charge up very quick from empty - within a few hours, plus they have a VERY slow discharge rate.

The other benefit with Gel and AGM is that they can take a lot more abuse. Mount them sideways, take them along corrugated dirt roads for 100's km's, they will be fine.
Rhett
https://www.youtube.com/channel/UC9e98c ... XUyixKJavQ

what solar charge controller do you use with your 150w solar panel?

Regarding my question about max voltage on GEL and AGM batteries: https://www.energymatters.com.au/compon ... discharge/

and also this on this 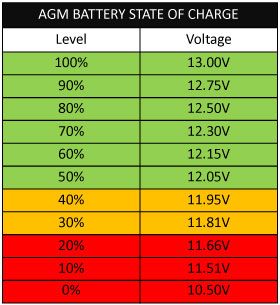 what solar charge controller do you use with your 150w solar panel?

Ant, I think it's a 50A controller, I will confirm tonight...

No it's a lead calcium deep cycle
Rhett
https://www.youtube.com/channel/UC9e98c ... XUyixKJavQ