Shortly after getting the 4.8 for the wife, she decided to be windgat reversing out the garage, not considering that the vehicle is bloody big and there is not much clearance between the side mirrors and the garage door.

In short: left hand mirror was busted. Glass broke, cracks on the housing (not very serious), and the entire mechanism was just floppy and loose. I patched up the damage and had a new mirror cut and fitted at Autoglass, but this was not automotive mirror glass, which means the perspective you have when using it is just entirely wrong...

Problem was: I was easily able to get a second hand mirror (dankie David), but "chromed" mirrors are in short supply, and I could only get a black one. So I decided to repair the chrome cover properly, and build the "new" mirror mechanism into the chrome mirror housing to get rid of the "floppiness"...

So here is a short, photographic howto of how to remove the mirror from the vehicle, as well as dismantle the actual assembly.

To get the mirror off, step one is to remove the piece of trim on the inside front corner of the window. This is simply held in place by to clips. You can use a screwdriver with a rag on the bodywork / trim to prevent damaging the finish.

Once that is removed, one needs to remove the interior of the door panel. 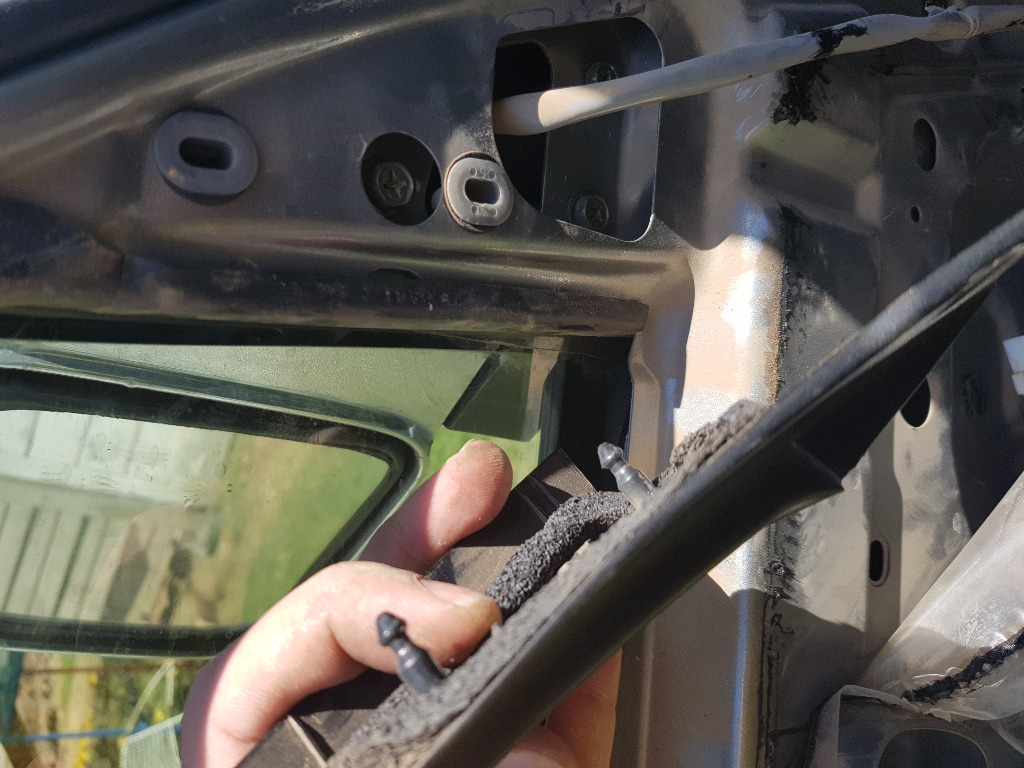 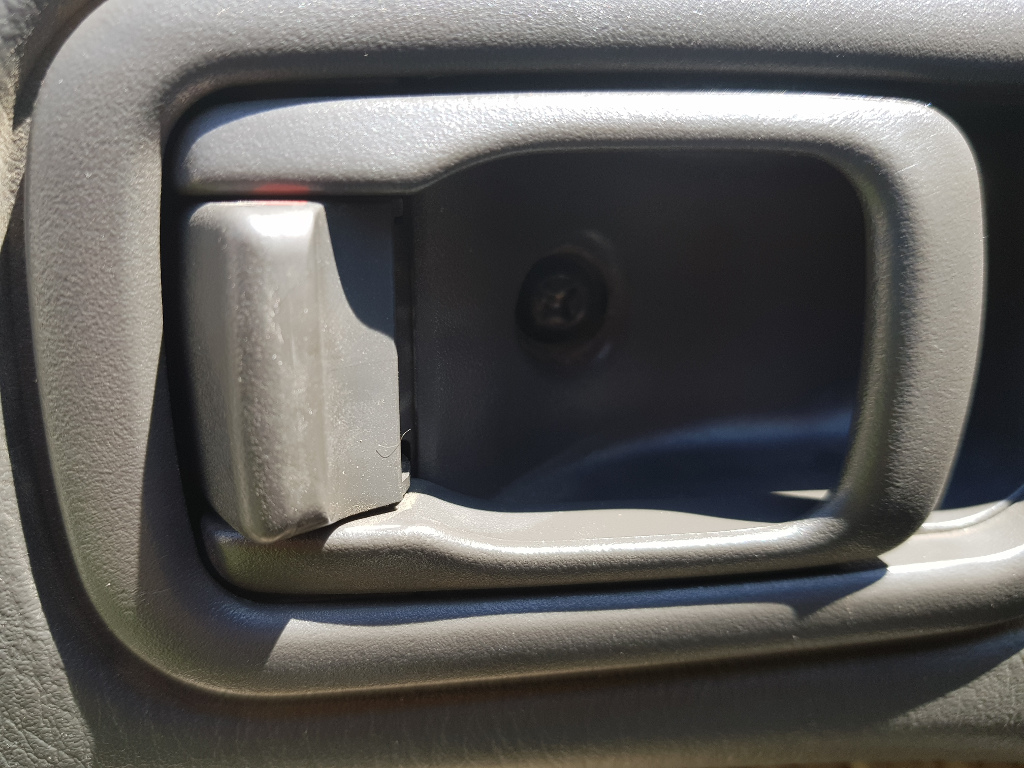 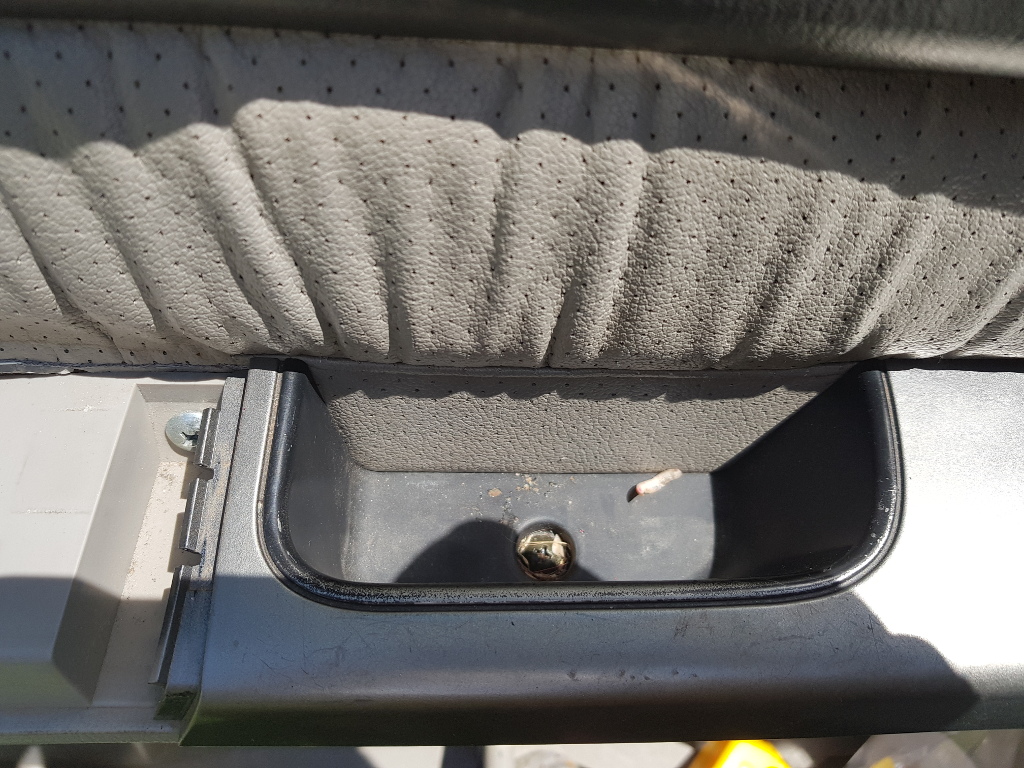 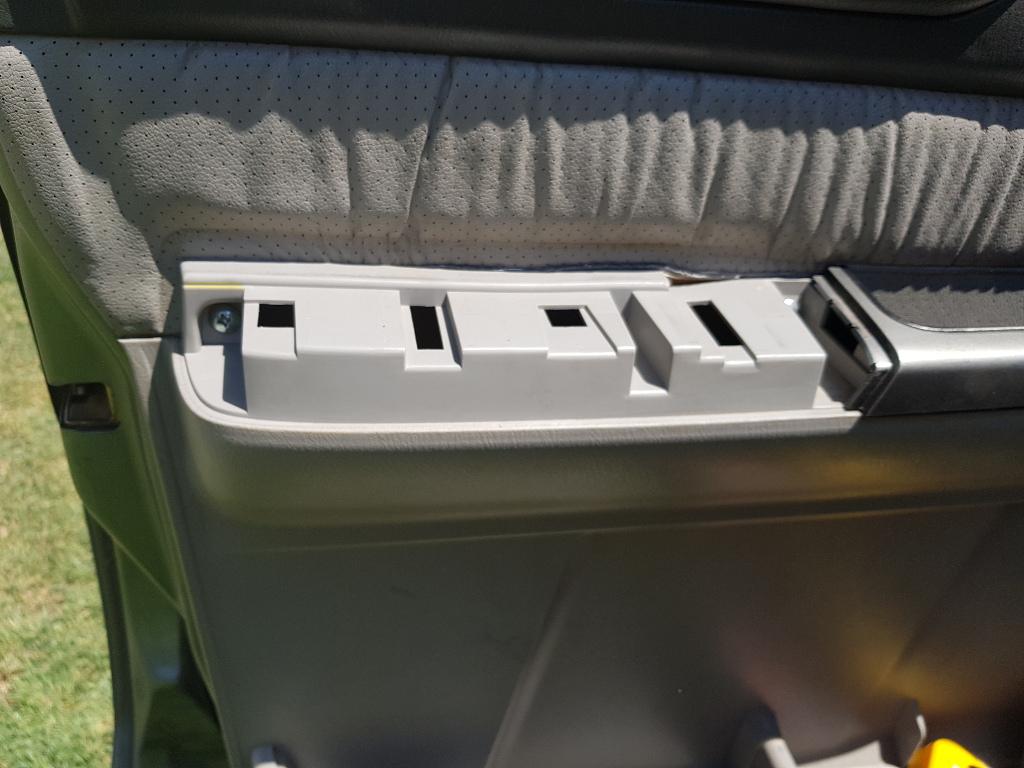 The next step is to remove the door panel. This is a little tricky, as it is only clipped in place. The panel is made of masonite, and the clips break out easily. All the clips are on the outside edge of the door. So what I did was to peer between the door and the interior panel from the edges to locate the orange clips, and then to use a large flat screw driver to pry the individual clips out slowly. It worked. I got the panel off without breaking anything...

Once the door is unclipped and loose, it will only be held in place by the lip at the top which hooks in where the window is. Git the panel a little of a jerk towards the inside of the vehicle, and the "trim" surrounding the door opener will clip out without damaging anything. At this point, the door panel can be removed by lifting it out towards the top - so that the lip over the window sill comes out. 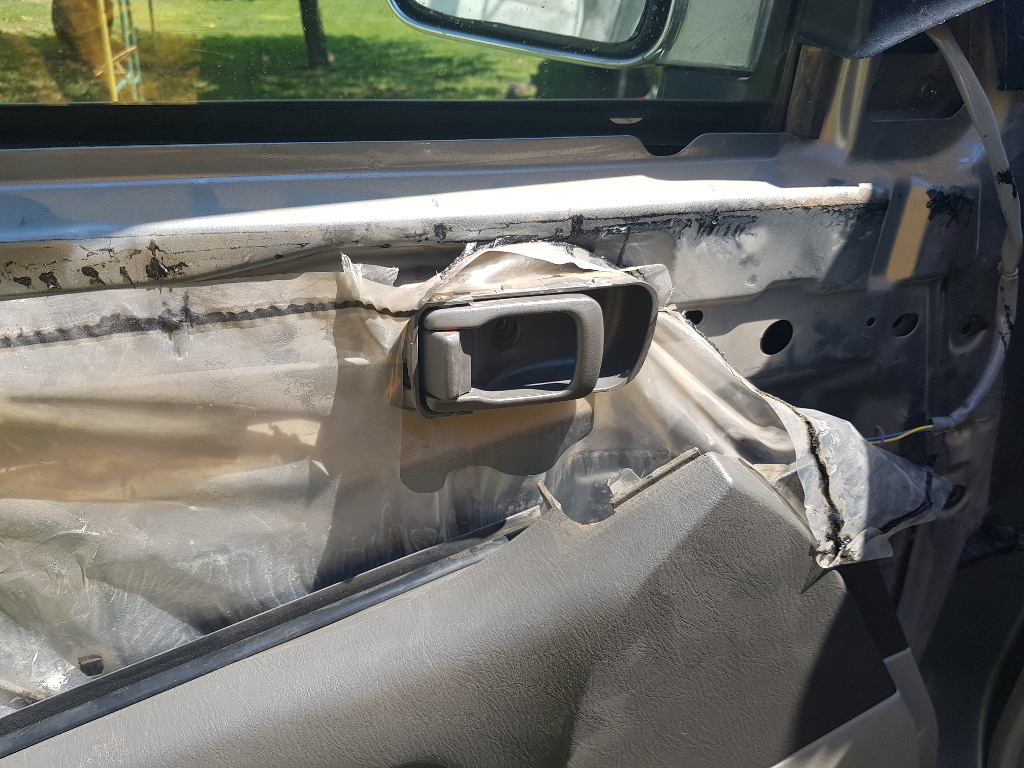 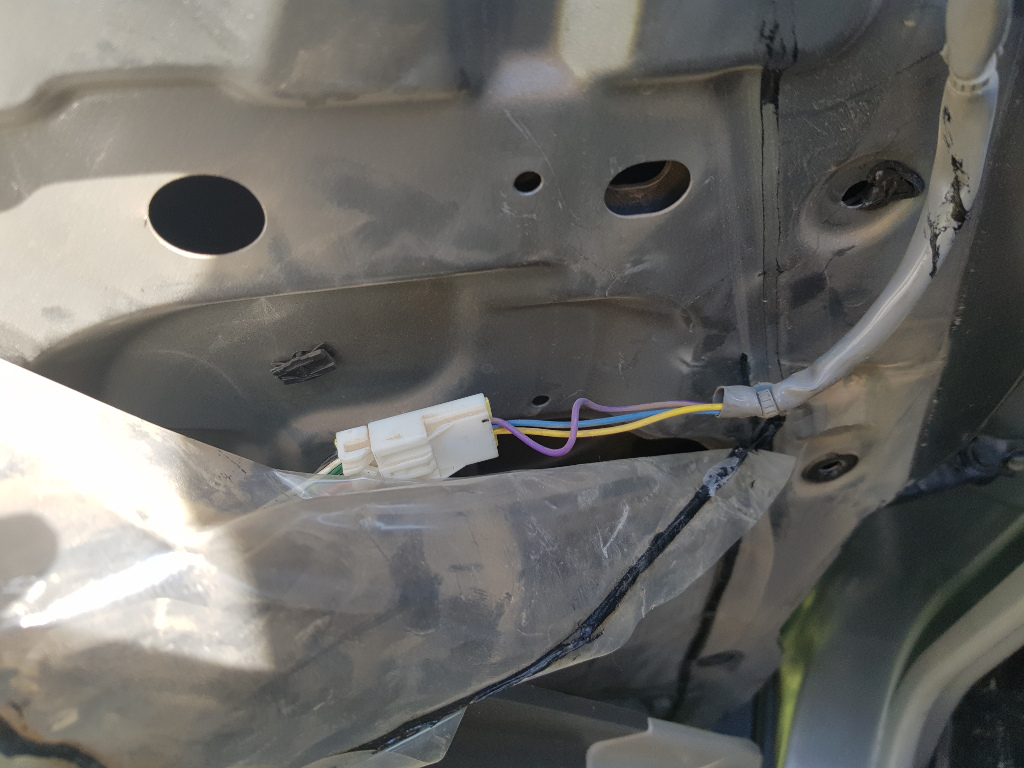 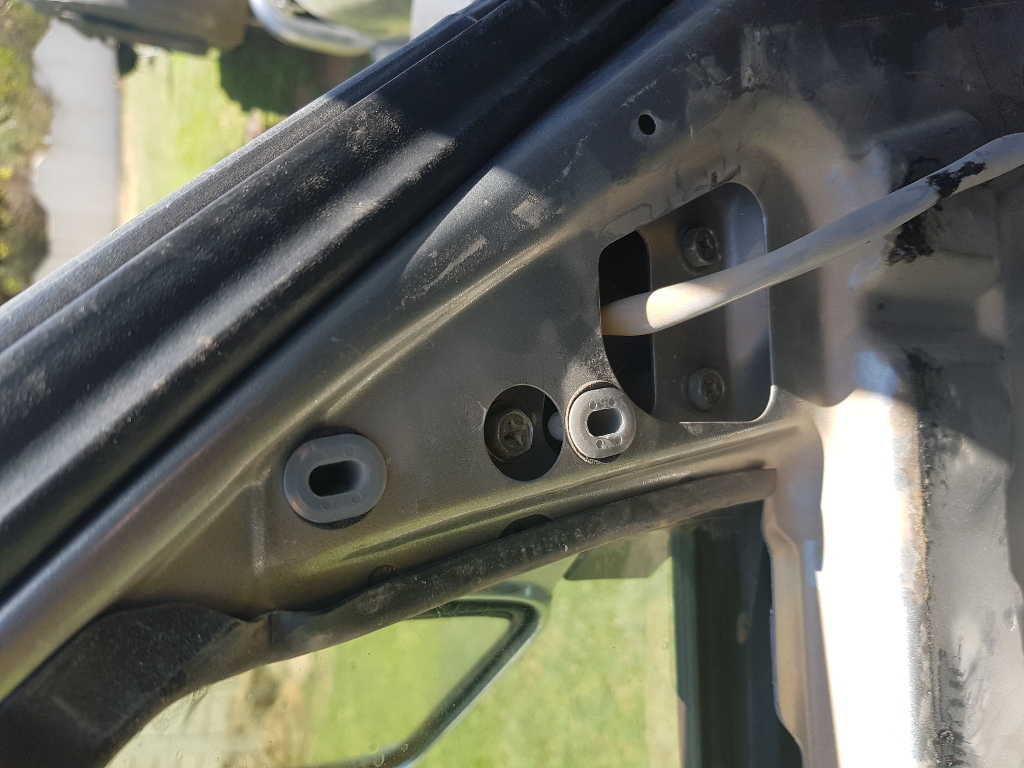 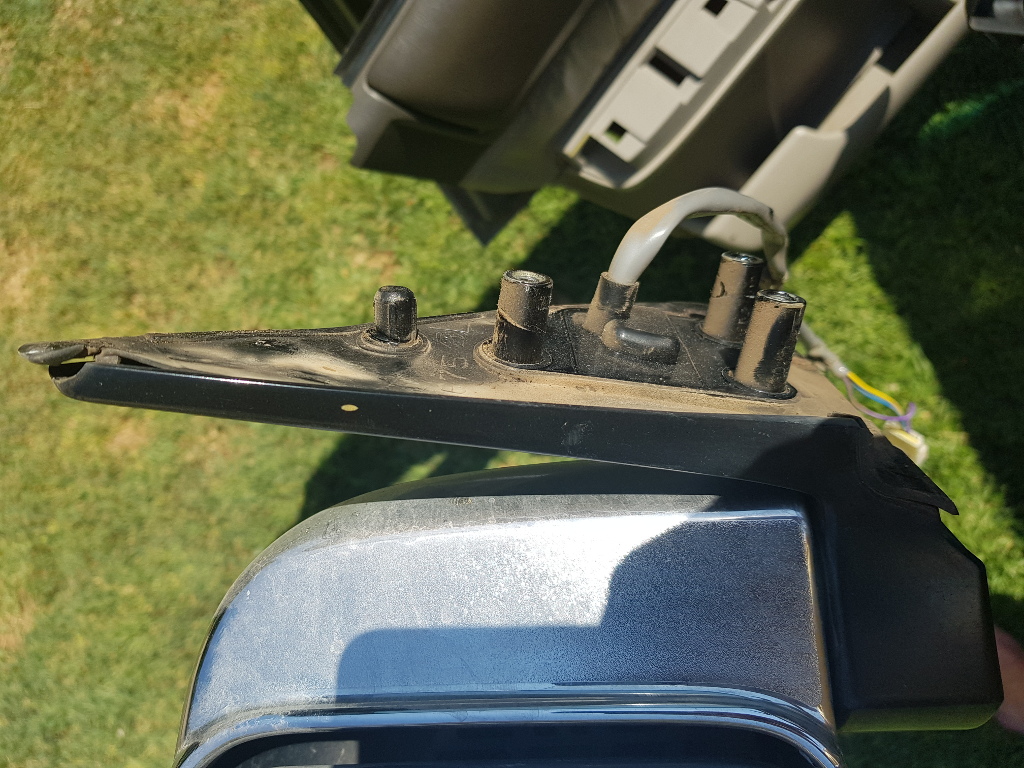 The next step was to strip the mirror assembly. Since I was rebuilding the entire control mechanisms into a new housing, I had to cut off the plug from the control cable as otherwise I would not have got it out of the housing. First step is to remove the cover at the base of the the mirror mount by removing the screw. This will expose three screws. These can be removed. The single screw on the inside edge of the mirror (ie: closest to the vehicle) also needs to be removed. Apologies - I got no photograph of this. 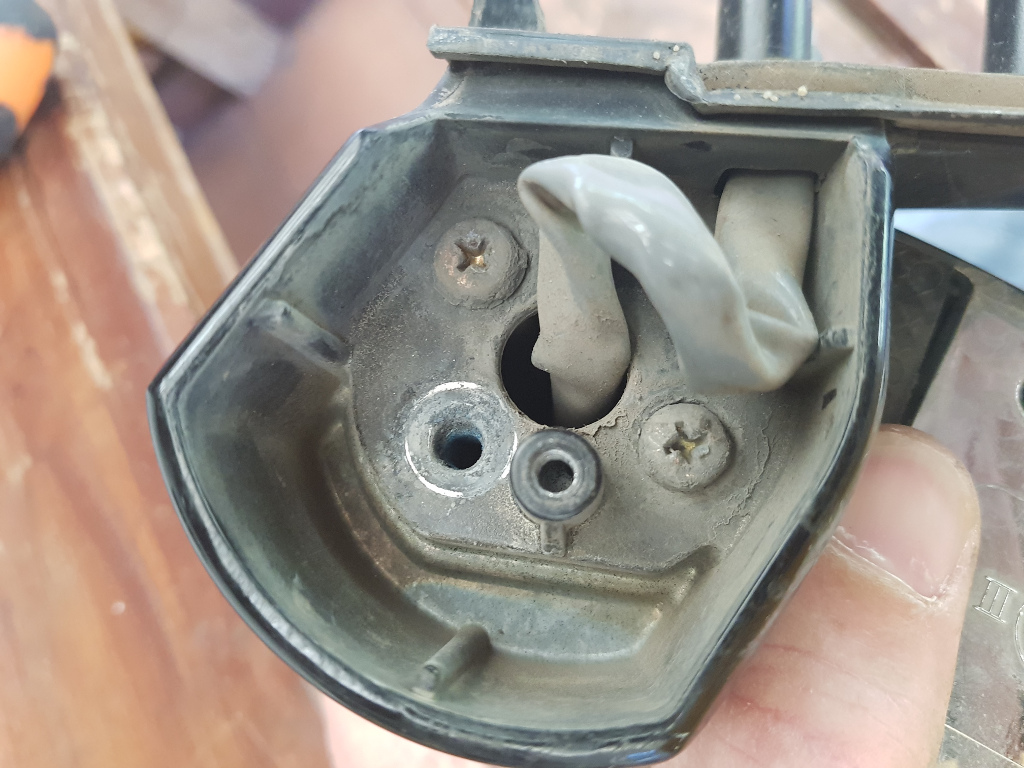 Sadly, the photographs of this are not very clear, but let us try anyways... To get the clips at the bottom to disengange, force the mirror at the top so that you've got a gap between the glass and the assembly at the bottom end of the mirror. In the photo you may just make out a piece of plastic on the back of the glass. Use a small flat screw driver to apply a bit of leverage between the class and the plastic, and the clips will disengage. At this point, the glass can be removed by pulling towards the bottom end of the mirror. 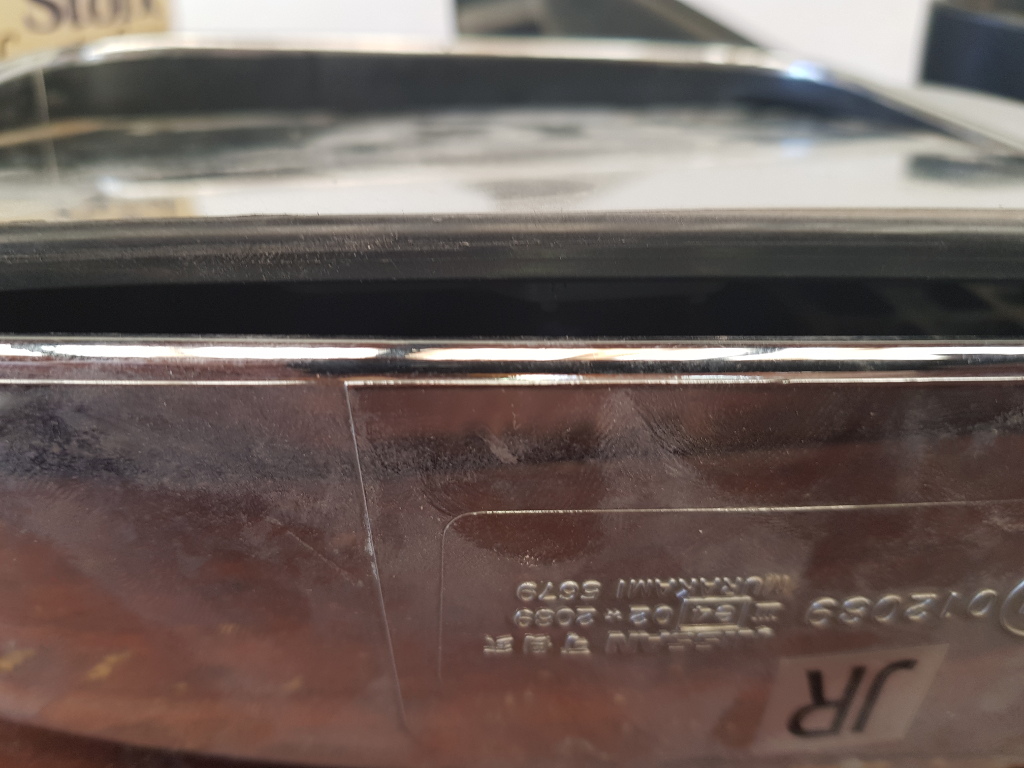 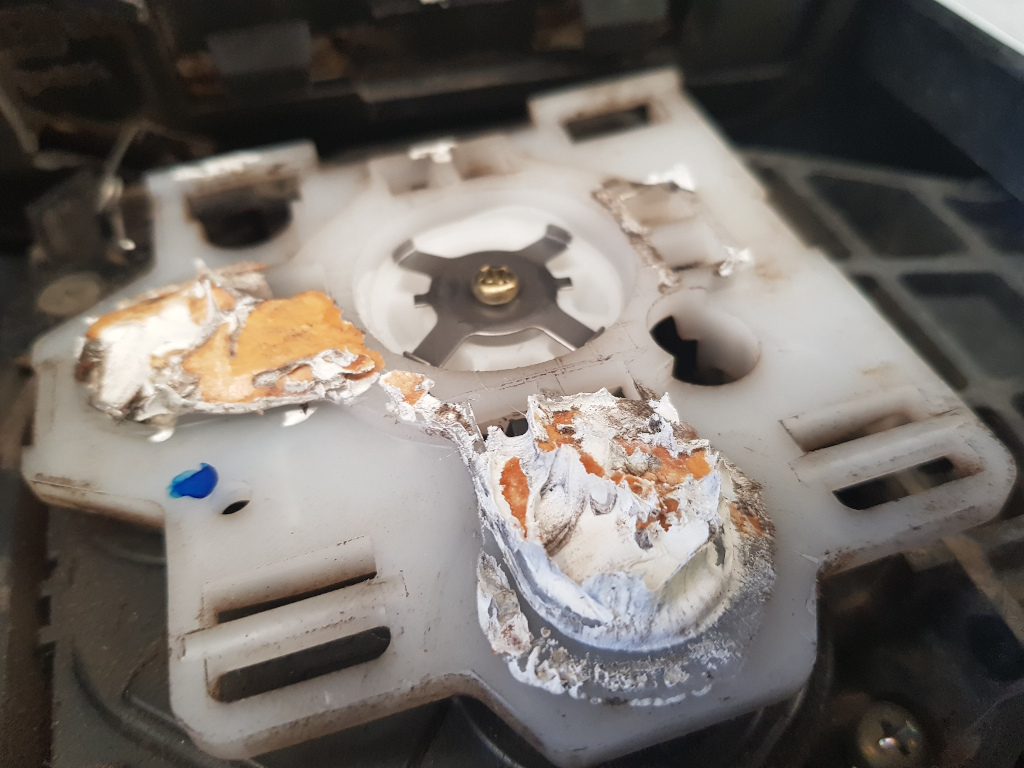 One of the caveats here, is that when removing the glass, the bottom end controller boot has a habit of climbing out of it's recess. You need to get it back into the recess, or the motor is not going to work properly. Simply use a small flat screwdriver to get it reseated.... 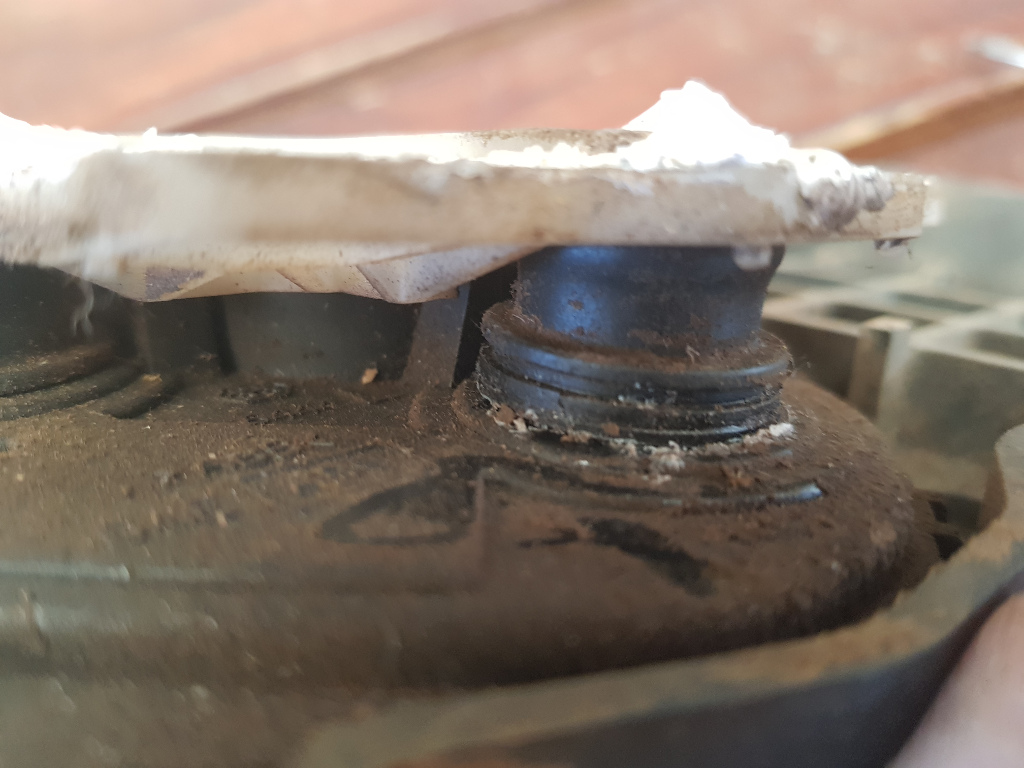 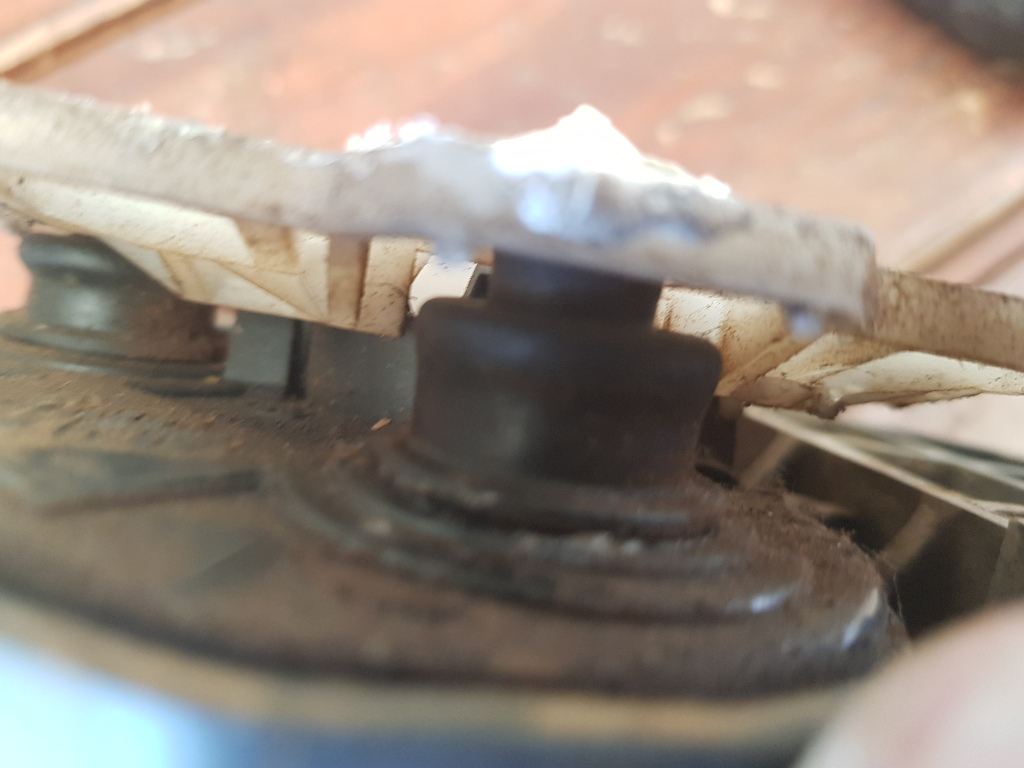 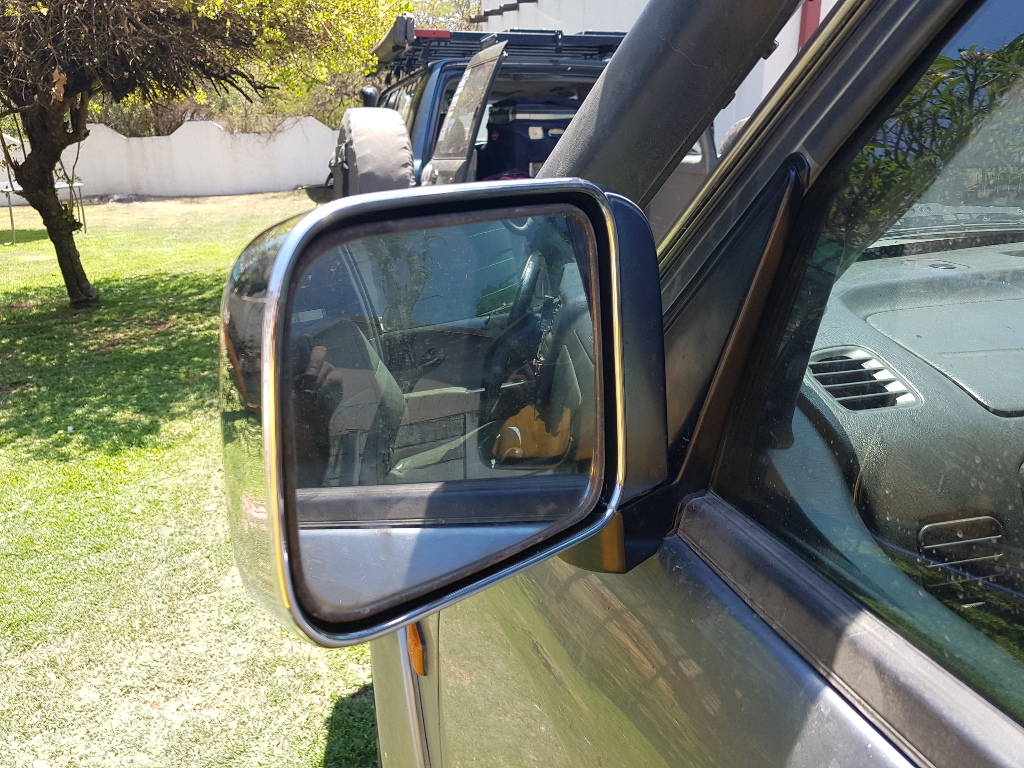 Anyways, simple. Hope it helps someone.

Oh - as a side note: I've got the following available. GRX mirror. Black. Controller mechanism a little damaged. Housing perfect. Fitted with generic mirror glass and not automotive spec. If anybody needs it, let me know. 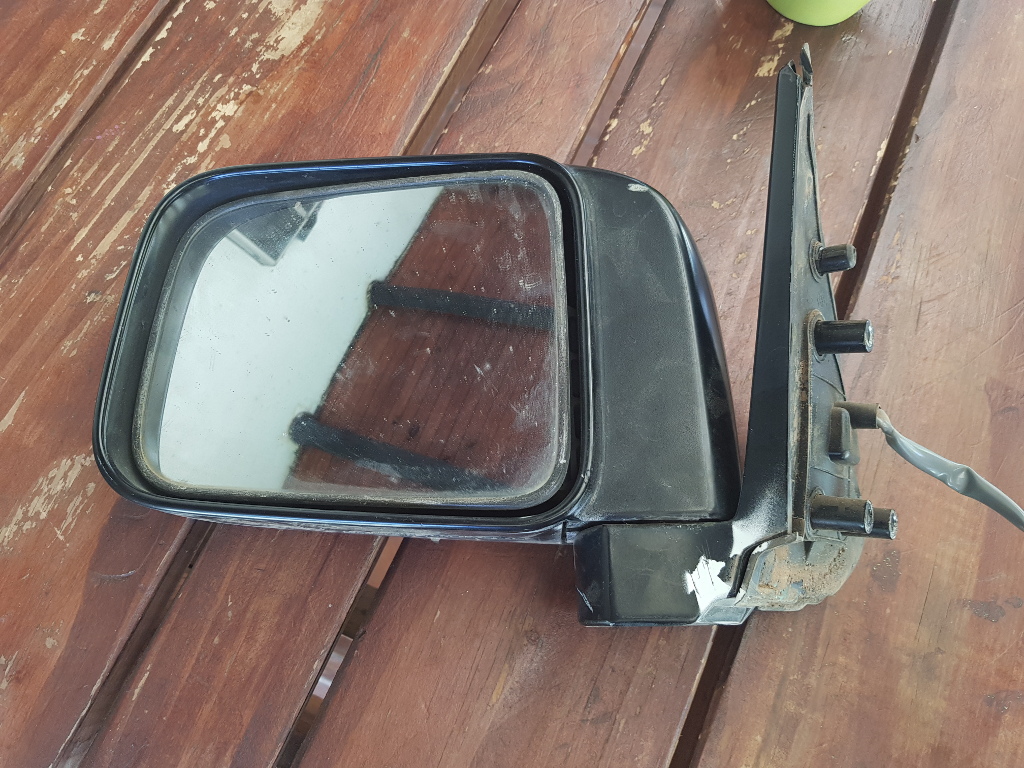 And detailed too Ian, thanks for the post
Have Troll, will travel.
Top
Post Reply
5 posts • Page 1 of 1