What tyres to buy

I'm also now looking at the Mickey Thompson BAJA ATZ P3, 32x11.5r15 is currently on a ridiculously good special on Errols..
I bought a second hand set of 33x12.5r15 cooper st maxx's, which is stuck in gauteng 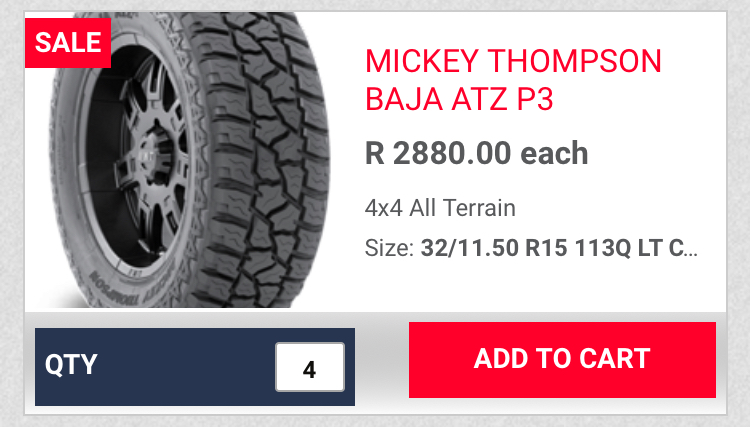 martyn wrote: ↑12 Oct 2020 17:25 Thanks Cedric. There is a bit of a problem with stock availability at the moment. We are waiting for new shipments to come in, but this virus is playing havoc with everything at the moment. Ad soon as the new stock arrives I will let you guy's know.

Got a quote last week for the Sani here on the West Coast on Sailun MTs, R3,390.00 incl per tyre. I did two end of last year when my Mitchilin LTXs split their sidewalls at low pressure. The Sailun were exact size of the LTXs so that I could run them together. Doing mostly deep soft sand, the MTs are slightly too aggressive and dig very quickly and easy. But its time to get the rears replaced, and looks like the budget will be capable end of this month to do so. Also racing against time as I will be moving to another farm in the next few weeks that puts me in the mountains with lots of rocks. I have not found a rock to drive over on this farm in nearly three years, and I think rocks are going to destroy the LTXs as they are now.

Sent from my SM-G925F using Tapatalk